Bats, Your Pets And Rabies

Home » Bats, Your Pets And Rabies 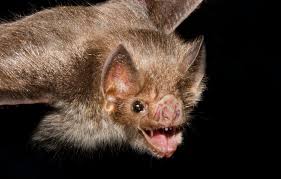 Sitting in the upstairs office I hear a shreak come out of one of the receptionist. When I check what is going on outside, the receptionist runs in and says I just saw a bat! Sure enough there was a small bat clinging on to the rafter on the outside hallway. It was only about 3 inches long. It may have been a baby, but we decided not to take a closer look. One of the first thoughts was a bat carries Rabies. Immediate action taken was to call Animal Control, which swiftly came and picked up the bat.

Since bats can carry Rabies and we spend a lot of our day vaccinating pets against Rabies I thought this subject would be a good topic to discuss. Rabies is a severe viral disease of the central nervous system. The Rabies virus is shed through the saliva and is mainly a disease of wild animals. If the saliva of an infected animal gets onto a break on and animal or human’s skin commonly through a bite, that animal or human may become infected. If the pet or person has been previously vaccinated against Rabies, then they will most likely be okay but a quarantine period would still be required to make sure.

Bats are the most common animal found in California that test positive for the Rabies virus. Other common animals are skunks which are commonly seen in neighborhoods. We get many dogs coming in to the grooming dept. to have a de-skunking bath after a curious confrontation with a skunk that made it in to their yard. Due to California’s strict Rabies vaccination requirement laws, we have been lucky to not have a lot of cases of Rabies in dogs and cats. On January 1, 2016, The California Dept. of Public Health declared 58 counties including Orange as Rabies areas. In December of 2015, a bat found at Irvine Regional Park tested positive for Rabies.

*Reporting and Analysis: The California Code of Regulations lists rabies in either humans or animals as a reportable disease. Health care providers, including physicians and veterinarians, in knowledge of a confirmed or suspected case of rabies are required to report immediately to the local health officer. In 2014, specimens from 5,899 animals were tested for rabies in California. Of the 56 counties that tested at least one animal for rabies, the number of animals tested per county ranged from 1-644.

Domestic Animals: Of the 3,392 tested for rabies there was 1 dog and 2 cats that tested positive for Rabies.

Humans: Zero humans tested positive for rabies virus in 2014. There were 4 cases that were diagnosed in California between 2005-2013. The most recent in one Contra Costa County resident in 2012.*

Rabies can be prevented by ensuring your pets are vaccinated against it. We recommend vaccinating your pets against Rabies starting at 12 weeks of age, then boost at 16 weeks of age. Most manufacturers recommend to boost the Rabies vaccine at 12 months after their 4 month booster and then vaccinate every 36 months (3yrs) thereafter. Ensuring that your pets stay away from animals like bats, skunks, foxes, etc. is recommended. Also keeping your pets away from unfamiliar pets that may be aggressive. You may be good at keeping your pet up to date on the Rabies vaccines but you never know if other pet owners are. If you or your pets are bitten by another pet, find out that pet’s Rabies vaccination history. You should then contact the local animal control agency. Get the pet owner’s information in case a quarantine is going to be required. Immediately wash the wound and seek medical attention. Please call us if you have any concerns regarding  your pet and rabies exposure 714-771-3261.

Written by Susan Lopez from Pet Hospital. Data on Rabies testing taken from Rabies Surveillance Report 2014 from the Dept. of Public Health.

Healthy Pet Hospital & Grooming  is conveniently Located in Orange just off the 55 Freeway at Chapman Avenue.